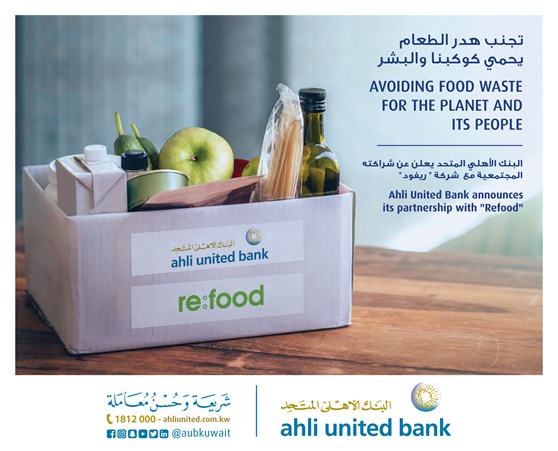 As part of its pioneering Corporate Social Responsibility (CSR) program, Ahli United Bank (AUB) announced its community partnership with Refood Kuwait; a non-profit organization aiming at solving the problem of food waste and loss in Kuwait. Refood collects surplus foods and consumables from local suppliers and foodstuff companies in a way that keeps their quality, and then distributes them to needy families a way that preserves their dignity.

Commenting on this initiative, Mrs. Sahar Dashti, General Manager Customer Protection and Head of the Bank’s CSR Team, said: “Through this community partnership with Refood Kuwait, we aim to contribute to spreading the culture of reducing food waste and benefit it in helping the most needy groups, in continuation of the efforts endeavors made by AUB help and support needy families, while at the same time conserving economic resources from waste, which is consistent with the teachings of our true religion, which urges the preservation of resources and not squandering them. Allah Almighty says in Surah Al-A'raf Verse 31: “O children of Adam, take your adornment at every masjid, and eat and drink, but be not excessive. Indeed, He likes not those who commit excess”.

Dashti added, “Through our CSR program, we have been able to serve many segments of society in cooperation with sincere national institutions that believe in the importance of charitable work, such as Refood Kuwait, which is founded on an innovative initiative for collecting food resources in excess of the need of suppliers and delivering them to needy groups to benefit them”.