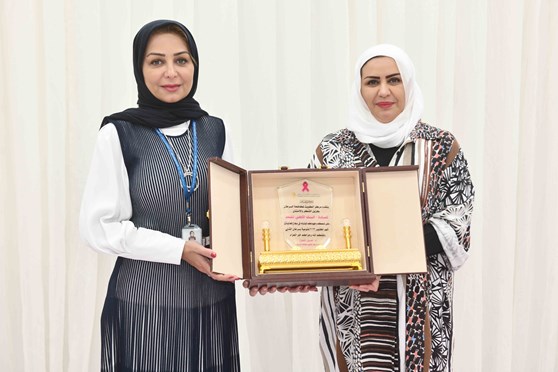 Within the framework of the joint cooperation between Ahli United Bank (AUB) and the Kuwait Center for Cancer Control success, r, Ahli United Bank was honored by Kuwait Cancer Control Center, in appreciation of the outstanding efforts made by the Bank’s Corporate Social Responsibility team in conjunction with Breast Cancer Awareness Month, which falls in October every year.

In this honor, the officials of Kuwait Cancer Control Center praised the positive role of AUB and its keenness to make breast cancer awareness efforts a success among the largest segment of women in the Kuwaiti society, in conjunction with october Month, which is the occasion to intensify the establishment of events, conferences, and campaigns to encourage women to detect early, as well as supporting breast cancer survivors.

Mrs. Faten Al-Tamimi, Head of Corporate Communication at AUB, considered this honoring of the Bank by Kuwait Cancer Control Center is a generous gesture that crowns the success of the fruitful and constructive cooperation relations between the Bank and the Center with the aim of contributing to raising societal awareness about the risks of cancer, how to prevent it, and the importance of early examination in this disease’s healing rate.

Al-Tamimi confirmed that Ahli United Bank was able during the month of October to intensify its efforts to carry out many community activities that contributed to raising awareness of cancer risks, in cooperation with Kuwait Cancer Control Center, and the Bank has harnessed all its media channels to spread health awareness on the largest scale in society to raise awareness of the importance of early detection in facing breast cancer.

Al-Tamimi added: From our side, we thank Kuwait Cancer Control Center for accepting our invitation to participate in the seminar organized by the Bank last October with the aim of building a healthy and motivational culture among the Bank’s female employees and raising their awareness of the risks of breast cancer, and the importance of early detection in diagnosing the disease, which included defining cancer in general, signs and symptoms of breast cancer, identifying factors that increase the risk of developing this disease, and ways of prevention. It also included the importance of early examination in diagnosis, assistance in recovery from breast cancer if detected in its early stages, and identification of sites where early examination service is available.

Al-Tamimi explained; that the AUB’s cooperation with Kuwait Cancer Control Center is ongoing and will include many community activities that will be launched this November, to raise the awareness of lung cancer, prostate cancer, diabetes awareness, and other health awareness campaigns.

Al-Tamimi stressed: We are proud of our cooperation with Kuwait Cancer Control Center, which plays an active role in the society through dedicated service to patients and visitors. Stressing that, all thanks, appreciation and respect are extended to them due to their prominent role in alleviating the suffering of patients and saving the lives of thousands of women suffering from breast cancer.

Back to Top
Hide Sitemap