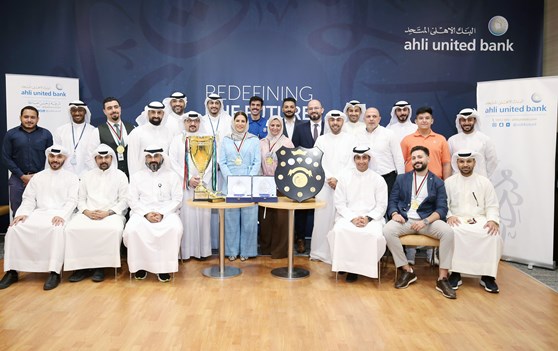 On this occasion, Mrs. Jehad Al-Humaidhi expressed her pleasure with this victory, which reflects the excellence of the Bank’s football team and their determination to achieve success. She also praised their efforts, sportsmanship and high morals that they exhibited in all the championship matches which made them the best representation of AUB employees in the championship. She also presented souvenirs to the team players in recognition of their efforts and enthusiasm to win the title.

In the same context, Al-Humaidhi touched on the excellence of all AUB sports teams, which always strive to achieve successes and championships to maintain the Bank’s excellence in sports, as well as the excellence of its products and services.

Al-Humaidhi underlined that AUB is always concerned to provide support to all sports teams in the Bank, including football, bowling and cricket, in an effort to achieve better results. She also highlighted that this honoring also aims to be an incentive for players to maintain this level and attain more achievements that raise the name of Ahli United Bank high. This also demonstrates the Bank's attention to encourage its distinguished employees in sports as well as its interest in its human wealth in various fields.

Al-Humaidhi added that AUB is one of the oldest Kuwaiti banks that has been concerned with supporting sports and encouraging athletes, pointing out that AUB recently participated in a ceremony honoring Kuwaiti athletes who won gold, silver and bronze medals in all games in the 3rd GCC Games held under the patronage of His Highness the Amir of Kuwait, Sheikh Nawaf Al-Ahmad Al-Jaber Al-Sabah. AUB was an official sponsor of the 3rd GCC Games. Moreover, AUB organized the Padel tournament last April. AUB was keen to make this tournament available to all wishing participants. Furthermore, AUB presented more than KD 3,000 cash prizes to the winning teams. Additionally, AUB sponsored GUST Padel Student Association Tournament 2022 organized by GUST students in the university’s courts.