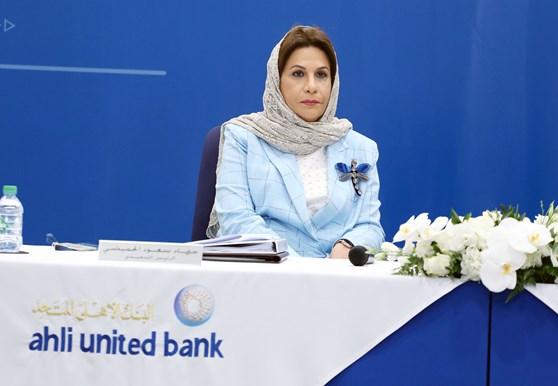 Ahli United Bank (AUB) held its thirty-sixth meeting of the Extraordinary General Assembly and the fifty-eighth meeting of the Ordinary General Assembly of the Bank’s shareholders yesterday, with 90.676% attendance rate. The General Assembly approved the items in the agenda, including the election of two independent members with extensive leadership experiences in audit, finance and compliance. The new elected members are: Mr. Yousef Hassan Yaqoob and Mr. John Griffiths This election is made in compliance with the directives of the Central Bank of Kuwait regarding independent members.

Two BoD members were also elected to fill the vacant positions for the reminder of the Board tenor scheduled to expire in 2024. Mr. Suvrat Saigal and Mrs. Jehad Al-Humaidhi were elected, who according to this election became the board Member and CEO of Ahli United Bank, thus becoming the first Kuwaiti woman to occupy these two positions in the banking sector.

Further, the General Assembly approved to authorize the Board of Directors to distribute semi-annual dividends to shareholders at the rates decided by the Board of Directors, provided this distribution is made from actual profits in accordance with the applicable accounting standards without prejudice to the Bank’s paid up capital, and subject to regulatory authorities’ approval on such distribution.

On this occasion, Mr. Jamal Al-Kazemi, the board member of Ahli United Bank welcomed the new members of the Bank’s Board of Directors, and wished them success in discharging their duties in the coming period of the Board current tenor. He also underlined his aspiration for their contributions to achieving the Bank’s strategy, and improving the level of services provided to customers, saying “The extensive banking and financial experience that the members of AUB Board of Directors have, is encouraging and provides grounds for achieving the aspirations of the Bank's shareholders and customers.”

Al-Kazemi added: We are confident that we will be able to make further progress and sustainable growth for Ahli United Bank thanks to the competencies and capabilities of the Bank’s BoD members plus the trust and support of our shareholders and customers. I also take this opportunity to extend my sincere thanks to the Executive Management and all employees of the Bank for their commitment and dedication to work.

For her part, Mrs. Jehad Al-Humaidhi said: “I extend my sincere thanks and appreciation to the Bank’s shareholders for giving me their precious confidence, and I look forward to cooperating with them in order to achieve the Bank’s strategic objectives to move forward and achieve added value at all fronts in a way that enhances and maximizes the interests of shareholders, and provides customers with a rich experience that befits Ahli United Bank’s unique position and long history.