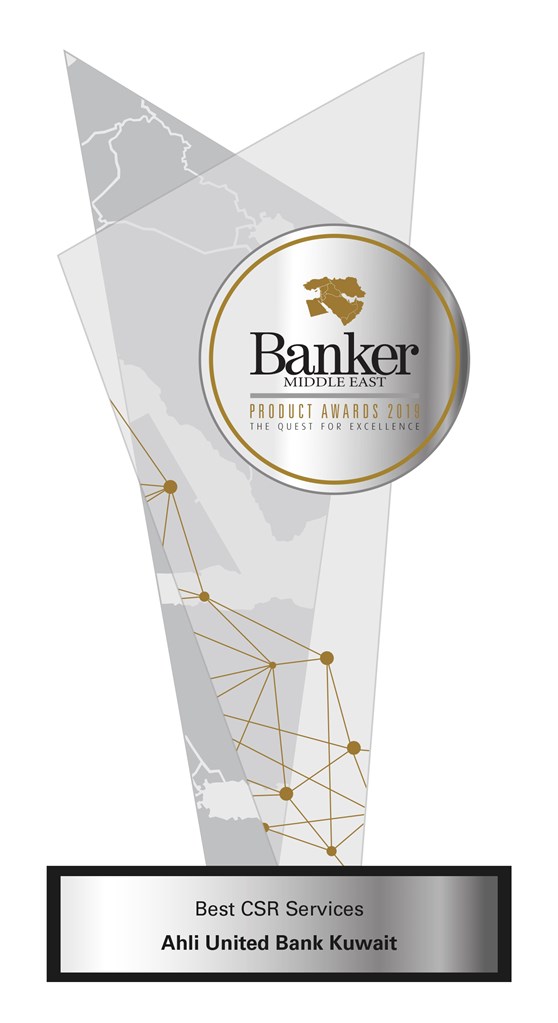 Ahli United Bank (AUB) earned the “Best CSR Services Award in Kuwait 2019” by the prestigious CPI Financial Banker Middle East in recognition of its laudable initiatives and constructive strategy aimed at the society’s progress and development.
CPI Financial Banker Middle East noted that AUB was recognized because of its understanding of the comprehensive concepts of Corporate Social Responsibility (CSR), as well as its keenness to complete the steps in accordance with the policies based on the Bank’s vision and appropriate mechanisms.
According to CPI Financial Banker Middle East, AUB has long-term impact on moving Kuwaiti society to better conditions, a dedicated team plus a crew of volunteers stand always behind the great success in achieving the program milestones. The Bank is also an important player in tackling social challenges, interacting with the issues of the society and the problems facing the communities, as well as its continuous right path towards modernizing the concepts of Social Responsibility and extrapolating future needs and trends to enhance its role through commitment then include CSR initiatives within its strategy & business model as main part.
This award is granted on annual basis by the Banker Middle East which runs a number of news and economic research platforms. AUB applied to “CPI Financial Banker Middle East” for an annual prestigious award of “Best CSR Services Award 2019”. The votes are made by only registered subscribers to Banker Middle East. AUB’s submission gained the highest votes in Kuwait to earn the Award and this highest score attained are attributable the main achievements and milestones during 2018/2019.

Commenting on winning this award, Mr. Tareq Muhmood, AUB Acting Chief Executive Officer, said: “Community and volunteer work is one of AUB’s priorities and part of its corporate culture. For that reason, we believe that the success of our CSR program is as important as the success of our banking business in which we have achieved a leading position. Receiving this prestigious award by AUB is undoubtedly a confirmation of the success of its remarkable CSR program, which puts on our shoulders a greater responsibility that requires us to redouble and intensify our efforts in this field to maintain this achievement.”
Mr. Muhmood added: “AUB, as the first bank to launch its operations in Kuwait more than 77 years ago, recognizes its critical responsibility in the community work through an integrated program to support various community issues.”
On her part, Mrs. Sahar Dashti, General Manager Customer Protection and the Head of AUB CSR Team, said: “The Bank has chosen to focus on the pillars of youth and environment as the two main elements of its CSR program. This is in line with the vision of His Highness the Amir Sheikh Sabah Al-Ahmad Al-Jaber Al-Sabah for New Kuwait 2035, as every person in the community plays a part in CSR which is a partnership that requires the collaboration and solidarity of all relevant sides. On such basis, we are working based on a strategic long-term plan to launch various social initiatives with positive and tangible impacts.”

Dashti added: “The efforts of AUB to support the community stem from its deep belief in the importance of giving and solidarity, as well as the role of each individual and institution to play an active role in the development of our society, by focusing on the integrated partnerships, supporting those in need, contributing to the growth and prosperity of our country, as well as measuring the progressive impact on the society, which reflect the true essence of community work to achieve sustainability.”
It is worth mentioning that CPI Financial, the publisher of Banker Middle East and the largest financial publisher in the Middle East, has been conducting Awards programmers associated with its market-leading banking and finance publications for the last two decades. Banker Middle East, its flagship title which now celebrating its 20th year, boasts more than 68,000 online members from across the Middle East who actively vote on www.bankerme.net.